Warning: "continue" targeting switch is equivalent to "break". Did you mean to use "continue 2"? in /home/motors/public_html/plugins/system/t3/includes/menu/megamenu.php on line 141
 MotorSports NT News 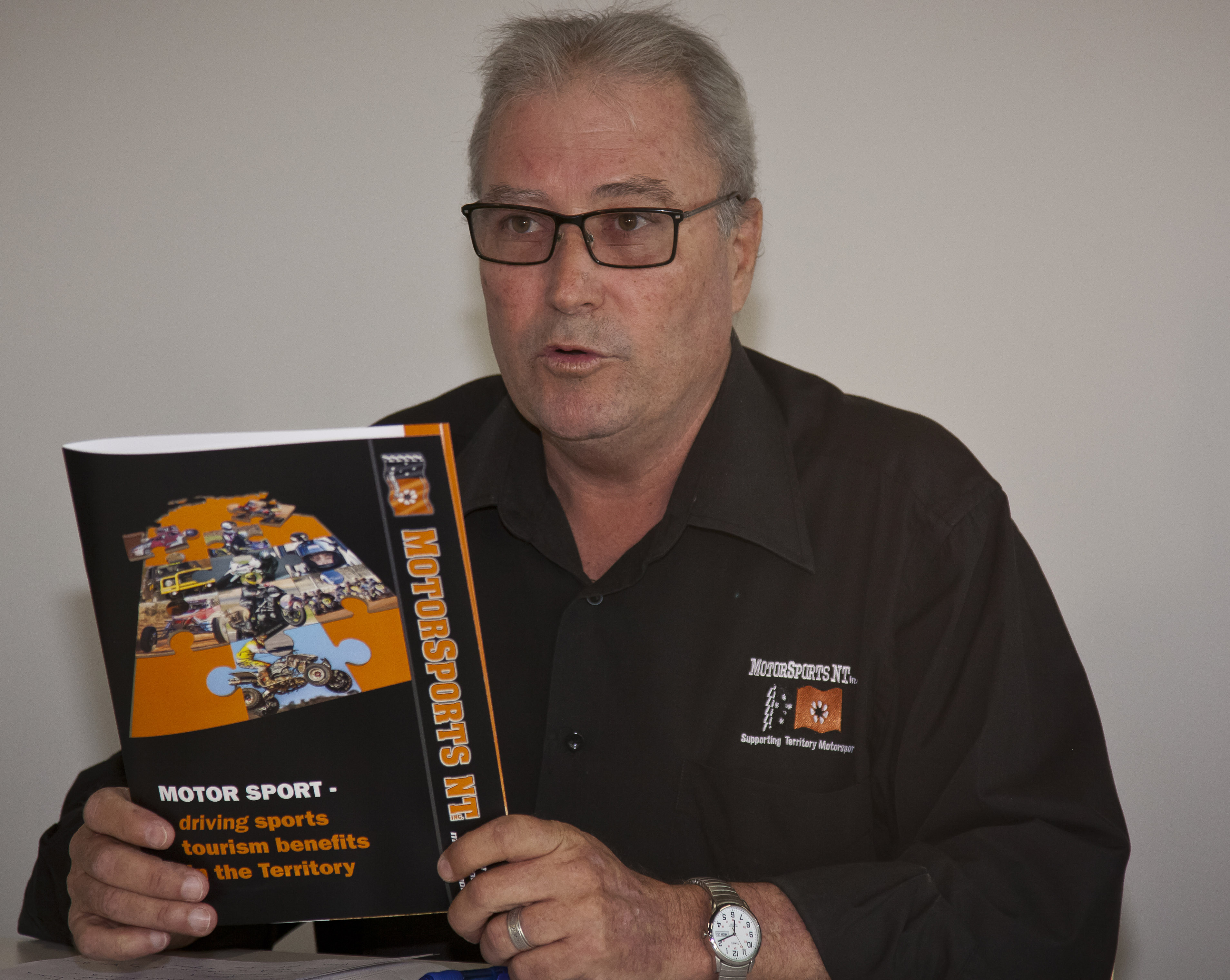 Congratulations to Grant Hamon in being recognised in the NT Roll of Honour at the NT Sports Awards on Saturday night.
Grant has a history in motor sport dating back more than 30 years, both as a competitor and a sports administrator.
Some of his Achievements:
Grant was the driving force behind the innovation of MotorSports NT as a recognised Peak Body for motor sport across the Northern Territory.
Successfully lobbying of Government to commit funding in excess of $40M across Territory motor sports since the formation of MotorSports NT.
Grant’s services to the wider community and to motor sports was exceptional and he spent inordinate amounts of time mentoring and coaching other administrators and committee members to better their clubs.
In 2015/2016, Grant had been instrumental in negotiating multi-million dollar funding arrangements for the 17 Territory-wide MotorSports affiliated organisations at the time for the next 4 year period to 2020.
There is no doubt that motor sport in the Northern Territory would not be in such a fantastic position as it is today without Grant’s contribution. 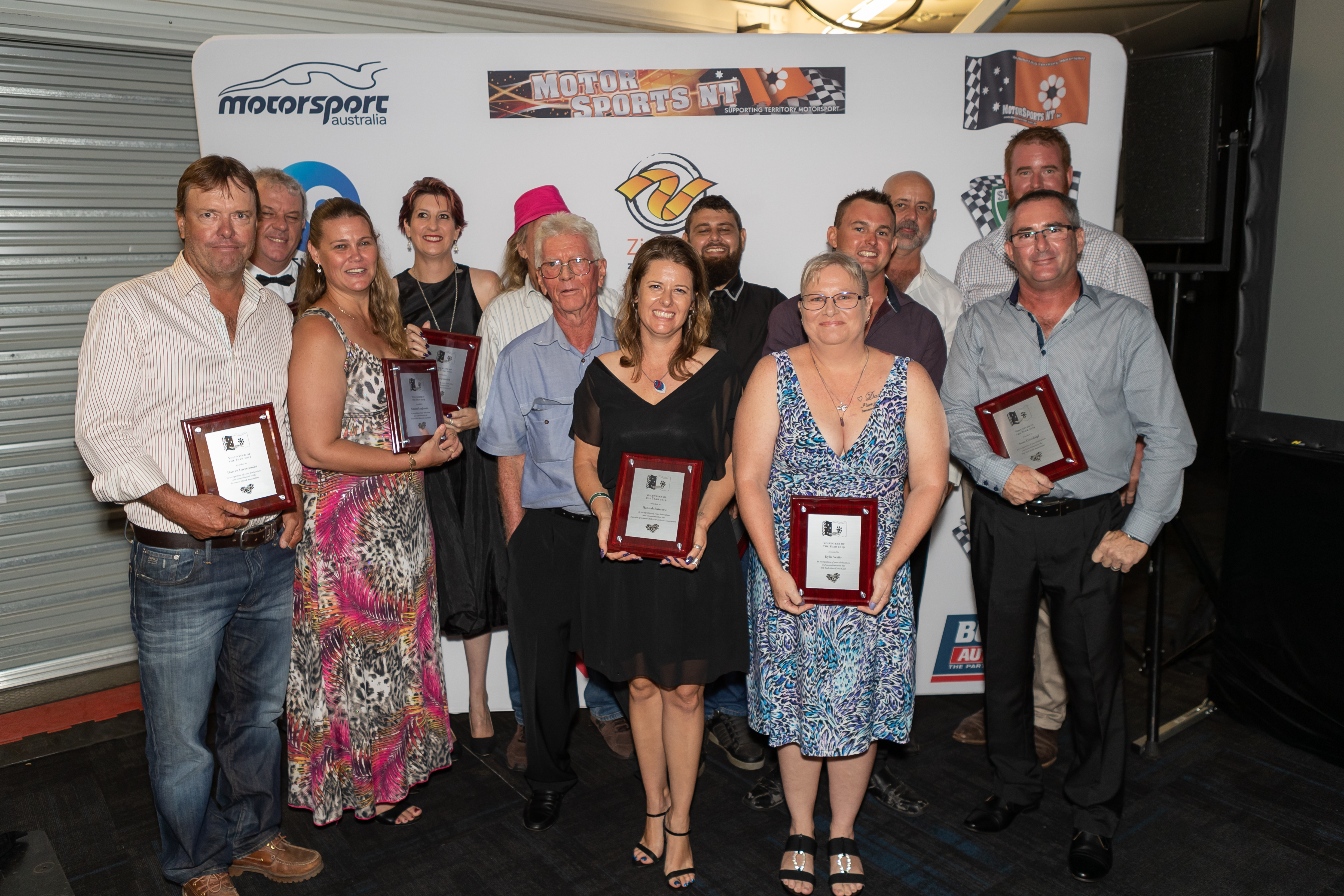 Together with Motorsport Australia, MotorSports NT, acknowledged various drivers from each discipline, as well as volunteers and officials.

Starting off the evening was the acknowledgment of three Motorsport Australia Service Award winners in Shane Davidson, Vicki Rice and Adriaan Gerritson – all of whom had successfully contributed to the sport.

The three service award winners were followed by awards for 20 clubs recognising specific individuals who had gone above and beyond at their events during 2019 and previous years before.

From the Top End Drift Association's Scott Grosskopf to the Alice Springs Off Road Race Club's Nina Kells, outstanding individuals from each of the NT based clubs were celebrated for their work in contributing to their discipline.

A further nine people were also awarded with Club Administrator Awards, thanks to their diligence and organisational skills in facilitating clubs events throughout the year, with Jacalin Ekins from the Darwin Speedway Riders & Drivers Association headlining these individual award winners as the outright NT Club Administrator of the Year.

On top of Ekins' involvement with her club as a passionate official and administrator, she also played a key part in running the highly successful 2019 NT State Event of the Year - the Chariots of Thunder.

One of the biggest Sprintcar events in Australia, the four-day event saw a 70 per cent increase in participation during 2019 and an impressive 11,000 spectators, while fans could also watch the event via a free broadcast.

Ekins found herself on stage a third time following her triumph as an official and event organiser, as she was also named as the NT Motorsport Person of the Year.

Taking centre stage alongside Ekins as a highly praised official was 2019 Official of the Year, Gavin Thompson.

From being a veteran Clerk of Course at many race meetings, developing and increasing his club's membership numbers and the training of new officials, Thompson was a deserving recipient of the award.

While Thompson was praised for his many years of service, on the opposite end of the scale was 13-year-old Jorja Thompson who took out the Junior Official of the Year title for her role in assisting with the running of each of the North Australian Motor Sports Club's race meetings throughout the year.

Outside of all the volunteers getting time in the spotlight, 15 drivers across all disciplines were also rewarded for their stellar 2019 seasons with Circuit Driver of the Year winner David Ling and Off Road Driver of the Year recipient Alex Heinzel amongst the winners highlighted during the evening.

Less than a week out from his Virgin Australia Supercars Championship debut as a full-time driver, Bryce Fullwood was named as the 2019 Burson Future Star Award winner for his incredible season in the Dunlop Super2 Series, which saw the 21-year-old dominate the talented field of drivers

NT Motorsport Event of the Year
Chariots of Thunder 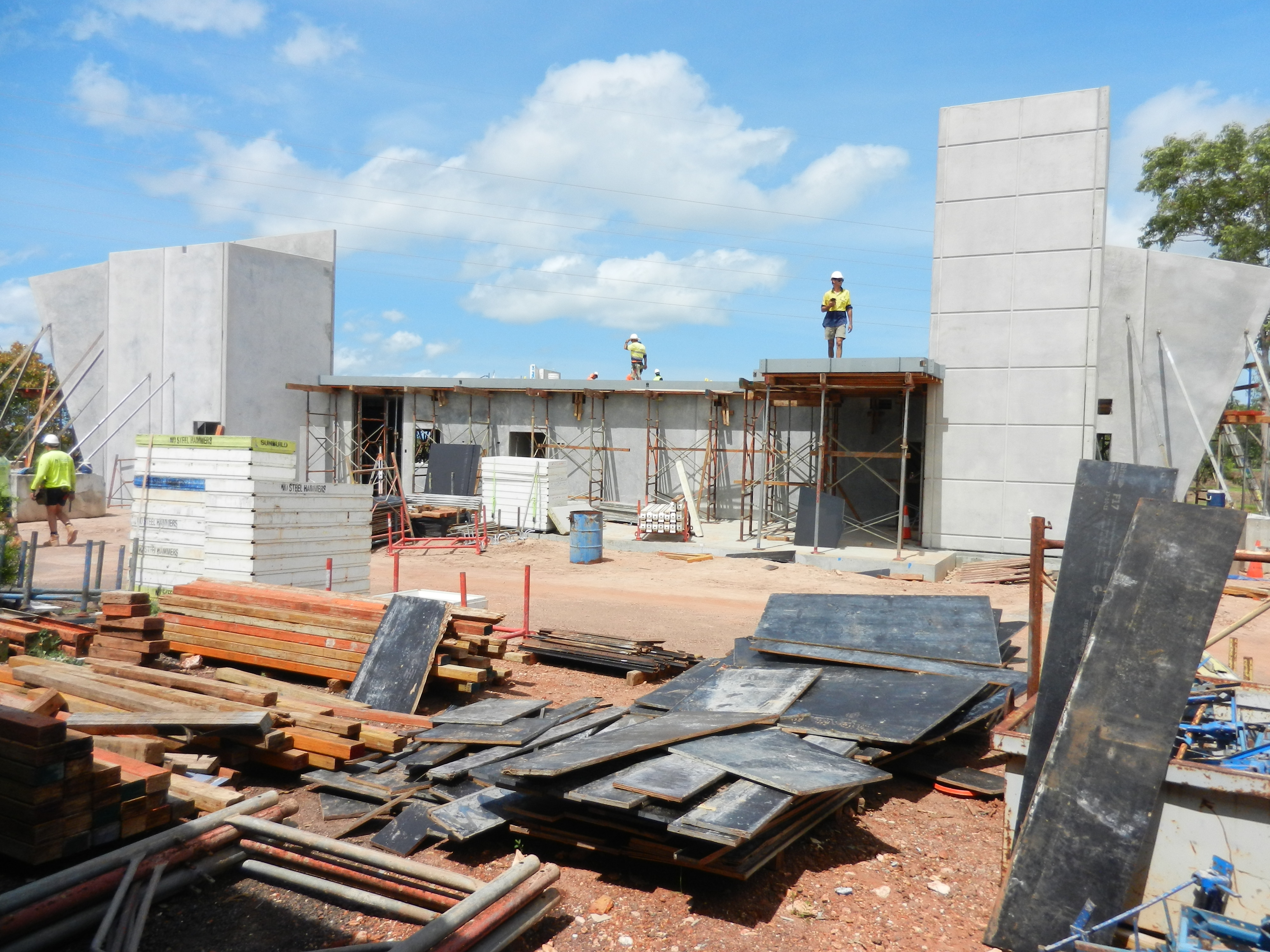 The Territory Labor Government continues to deliver for motor sport in the Territory with the construction of Motor Sports House at Hidden Valley nearly a third of the way complete.
Local company C & R Constructions Pty Ltd were awarded a contract for $4.9 million to design and construct the new Motor Sports House, which will provide a central corporate meeting place for industry and events.
It’s estimated this project will create more than 30 jobs during construction.
Cranes are arriving on site this week to start installing the structural steel, with completion still anticipated for mid-year.
There are more than 5,000 licenced motor sport competitors, pit crew, volunteers and officials in the Territory with over 160,000 spectators at motor sports events annually.
Every year, Hidden Valley Motor Sports Complex hosts a range of motor sport races and club events, including the Supercar Championship Series, drift events and drag racing along with providing a home to a number of motor sports clubs.
This project will bring the facilities in line with other Australian motor sport venues while benefitting a range of motor sports clubs with provisions for a hot desk facilities and much needed new administration space, training and conference rooms.
The building will complement the range of upgrades to the complex, including new broadcast quality lighting to the drag strip track, hydraulic upgrades and new safety tyre walls and upgrades to the drags spectator safety area.
Works have been programmed to ensure minimal disruption to activities of Hidden Valley Motor Sports Complex.
Quotes from the Minister for Tourism, Sport and Culture, Lauren Moss:
“The Territory Labor Government’s top priority is creating jobs.
“We are investing over $13 million into motor sport infrastructure across the Territory, because we know how much motor sport means to competitors and spectators.
“Motor Sports House is a key component of this investment that will allow motor sports to continue to grow and flourish.
“Motor sport events across the Territory bring thousands of tourists here each year. This provides a great boost for the economy, encouraging further tourism opportunities and supporting local jobs across the economy.” 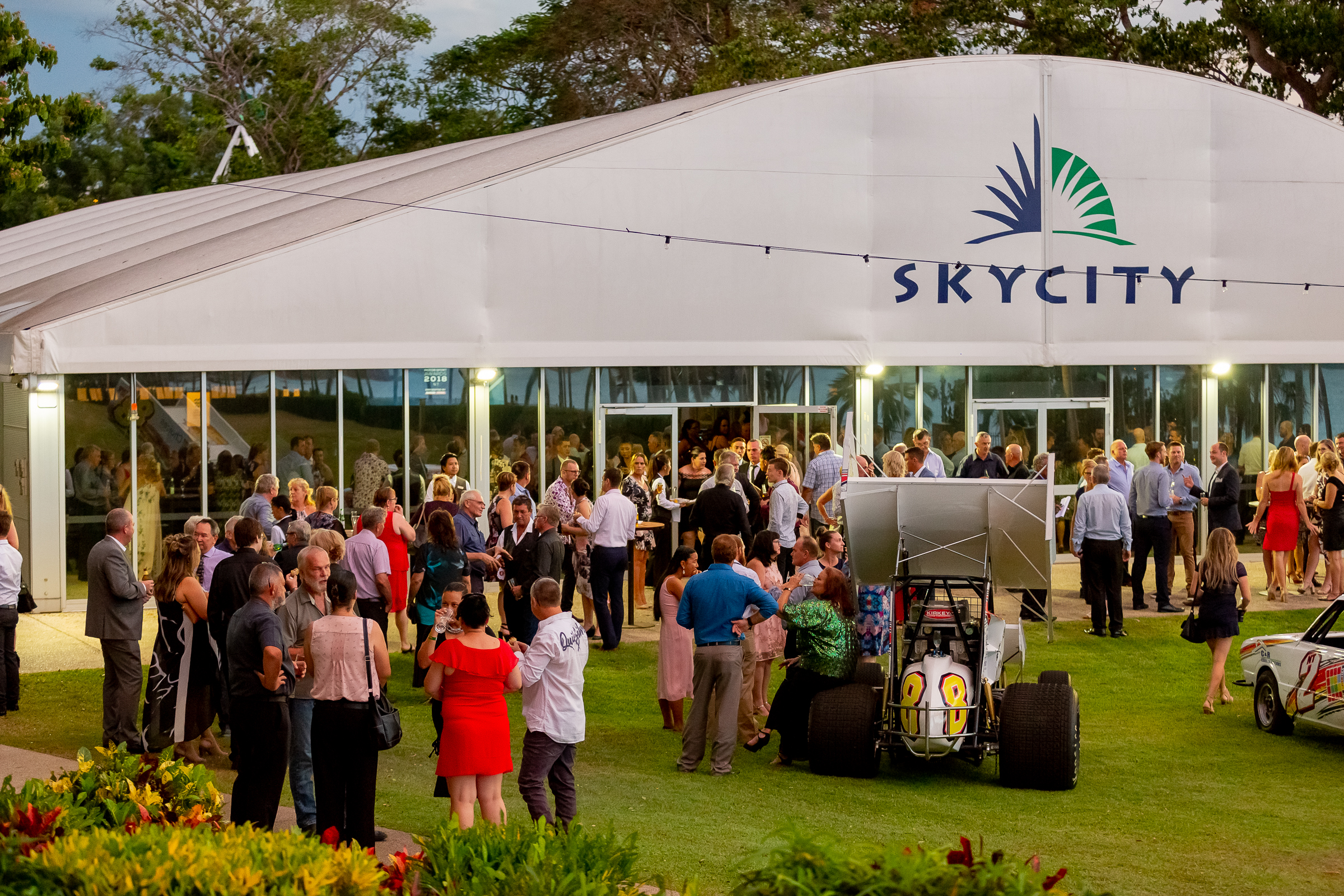 Thank-you to all who attended and supported the Inaugural CAMS/MotorSports NT Motorsport Awards on Saturday Night at Sky City, Beachside Pavilion.
Special thanks to Charlie King who was the MC for the night.
Special thanks to Thomas Maxwell and Bryce Fullwood who were the guest speakers for the night.
Thank-you to Debbie Turner for presenting the MSNT Affiliated Club Volunteer awards. 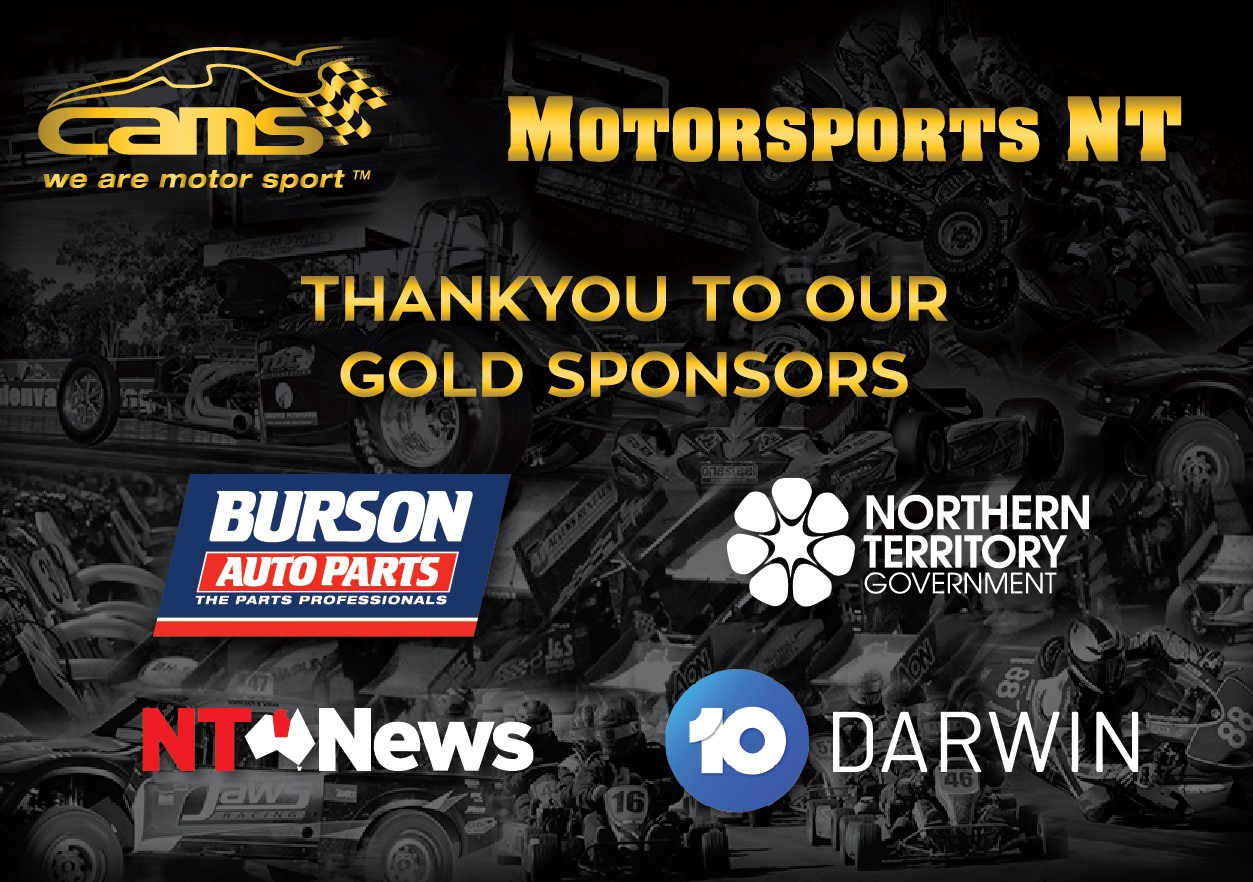 The Inaugural Motorsports Awards are fast approaching.... a big shout out to our generous sponsors for 2019.

The Confederation of Australian Motor Sport (CAMS) and MotorSports NT (MSNT) have further cemented their partnership and will continue to work closely on a number of projects in the future.

The recognition of Territorian champions within the Territory is one of those projects CAMS and MSNT had discussed, with confirmation a Motor Sports NT Awards night will be held in the next 12 months.

Both organisations have now agreed there was a need to recognise the Champions of NT motor sport in the Territory.